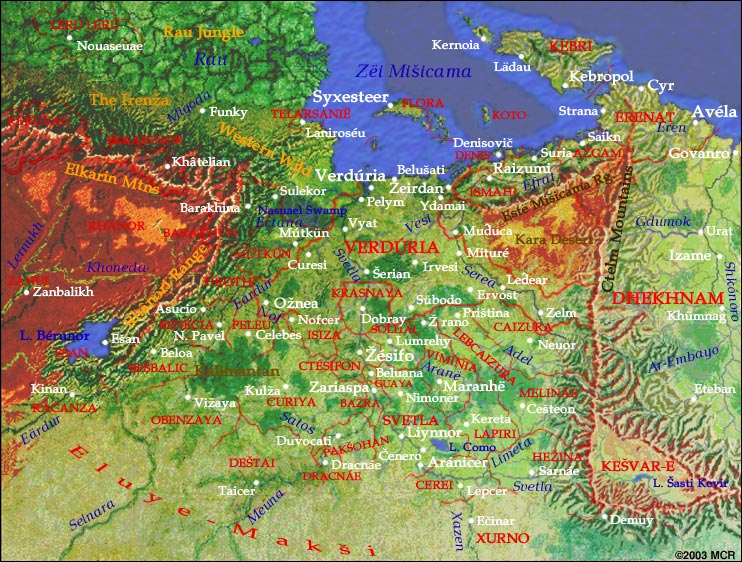 Unlike most fantasy worlds, Verduria does not correspond to our Middle Ages; socially and technologically it is most comparable to our 17th or 18th century. Verduria and other advanced Almean states have already rediscovered classical learning, and worked out the scientific method (soa žuyse onteca), the joint-stock limited-liability corporation (cumbutát imbineyul), and parliamentary monarchy. The first factories are beginning to be built in the larger cities. Printing, clockmaking, and shipbuilding are well advanced; indeed, Verduria has founded its first overseas colonies (Lean and Karáumia on the east coast of Ereláe; and Téllinor on the western coast).

Planets do not develop at the same pace. Verdurians are ahead of terrestrials of the same technological level in the areas of biology and linguistics, having already elaborated the theory of evolution (ulečea) and reconstructed proto-Eastern (so pere řon), the protolanguage underlying their own and many other modern languages. They are behind in terms of military technology; they've invented the cannon, but Verdurian firearms still tend to be more lethal to the shooter than to the target. And the machine loom and the steam engine are still in the future.

The first civilized states in the Plain belonged to the Monkhayic peoples, c. -1150. These states were swept away c. -375 by the Easterners-- no longer speaking proto-Eastern, but early Karazi and Central languages. The Karazi peoples were the more advanced of the two groups, and founded the kingdom of Cuzei in the Eärdur valley, notable for its monotheistic religion and extensive literature.

The Caďinorian Empire absorbed the declining Cuzei-- not without struggle-- and prospered for nearly a thousand years. Magnificent Caďinorian ruins still dot the Plain, and the ancient capital of Ctesifon is still impressive. At its height (c. 1750) the Empire encompassed the entire Plain as well as most of the former territory of Munkhâsh to the east.

The Empire declined, succumbing to civil war and tyranny with the usurpation of the Red Cabal (soa Ružë Clečura) in 2107. At the same time the military balance of power had shifted to the nomads of the open plains south of Eretald, who had learned to fight on horseback (rather than from chariots, as in classical times). The Plain suffered one barbarian invasion after another. Ctesifon itself was occupied, not for the first time, by the Bešbalicu in 2435. The apogee of the barbarians' power was the continent-spanning empire of the Gelyet (26th century).

Numerical growth and military innovation have restored the fortunes of the agricultural states; and the Plain has emerged from its Dark Years. The kingdom of Verduria was proclaimed in 2943, and soon came to dominate the northern Plain. Classical learning has been revived and surpassed; and the Verdurians, traders and sailors, have created a more commercial and exploratory culture than the Caďinorians ever did.

The religious and linguistic unity of the Plain has been lost. Caďinor, the language of the Empire, has become a family of languages: Verdurian, Barakhinei, Benécian, Ismaîn, and Sarroc. And Caďinorian polytheism has found itself in competition with Eleďát, a composite of the ancient Cuzeian religion with the new teachings promulgated by the Eleniki, who arrived in Eretald in 2780.

Major states of the Plain (besides Verduria)