Today's theme is girl superheroes, all discovered as I look into women in comics. All of these originally started as webcomics, and are now available as God intended comics to be, in books.

While we're at it, let me note that this is my 60th review, and that I've been doing this, at a glacial pace, for twenty years!

Nimona, like Bone, starts out fun and weightless and develops surprising depth.

Nimona is a teenage girl with pink punk hair who shows up in the lair of a mad scientist, Ballister Blackheart, explaining that “The Agency sent me— I’m your new sidekick!” Before the end of the page she’s confessed that this is a lie and that she just wanted to work with her favorite supervillain. Also she's totally a shapeshifter.

At once they proceed to supervillainy— in this case, infiltrating the headquarters of Blackheart's nemesis, the Institution for Law Enforcement and Heroics. Things go wrong, not least because Nimona likes to improvise, not to mention take a straight path to her goal.

This part of the book is a lot of fun. Nimona is a force of nature— at one point fangirling Blackheart, at the next mowing down goons, at the next insisting on ordering pizza, even though they charge a lot to deliver that far from the city. Blackheart tries hard to keep up. He tries to tone down her excesses (such as her delight in murdering goons), but also shows suprising reserves of tact. He listens sympathetically to her backstory and treats her as an ally rather than an underling.

It looks for awhile like this will be an ironic Evil Is Cool reversal, but it slowly becomes evident that the Institution, and its chief knight Sir Ambrosius Goldenloin, are far less benign than they claim. And that's fine; this turns out to be a more interesting story. At the same time, it's not simply the case that Blackheart and Nimona are the good guys… especially Nimona. (There is also a nice unapologetic mix of fantasy and sf elements.)

Not to get all heavy on you, but one reason I'm fascinated by these comics is that they're figuring out how to avoid the old demeaning tropes about women. Nimona has her vulnerable moments… but she has oodles of agency. She is more than a resourceful shapeshifter, there is no romantic component to the story, she refuses to be treated as a child, and though there's a point where she is captured, it's emphatically the temporary predicament of a powerful protagonist.

The art is stylized, with a rich color palette. I like the way Stevenson makes Nimona a little chubby. She may be a shapeshifter, but it's one more sign that there's nothing pixieish about her.
The best Catwoman comic may not be a Catwoman comic at all. Of the ones I’ve read, I liked Darwyn Cooke’s the best. But I found a book that is just what I think Catwoman should be: Bandette. It started as a webcomic, but it’s now available in two hardbound volumes. 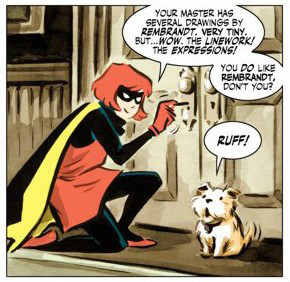 Bandette is a Parisian teen girl thief. (Her real name is Maxime Plouffe.) The first two chapters set the tone: she breaks into a mansion, steals some Rembrandt miniatures, gets seen, escapes, helps out her police friend with the aid of her teen irregulars, talks to her rival (whose nom de vol is Monsieur), flirts with her friend Daniel, and earns a death sentence from a villain named Absinthe.

It’s fun, it’s well done, and it’s completely weightless. No grimdark at all, at least in volume 1– Absinthe seems no more dangerous than Mr. Rastapopoulos in Tintin. Can you tell I’m sick of grimdark? Not long ago in the DC universe, Joker apparently cut his face off. And then his face became a McGuffin for awhile, and then he got it back again. Back on his face, that is. I guess that’s pretty crazy, but a) it’s a steal from another media property; and b) it’s really pretty dumb. It’s grimdark as the camp body horror other half of Batman 1966.

I’m guessing Tobin has read some French BDs… the fact that the police inspector’s name is BD may be a clue; also the Tintin-level mixture of humor and adventure. Bandette also owes something to Irma Vep, classic catsuited French thief. Tobin has everyone talk as if poorly translated from French:

Bandette: Is it not obvious, Daniel? It is a mischief list!

Bandette: Yes, it’s very exciting! It’s a listing of items owned by Absinthe. …It would be the height of folly to attempt to steal them.

Bandette aims to do just that, of course– she has a very high opinion of herself. Which in a real person is not a very attractive quality, but she somehow pulls it off, perhaps because the fun she’s having is so contagious. (When she visits Monsieur, to propose a mutual challenge, she starts off by asking if he has any cookies.)

I picked it up on the strength of Coover’s name– I loved her Small Favors, and few artists are so good at drawing cute girls. But she can draw much more: big-nosed Parisian cops, middle-aged master thieves, Parisian rooftops, etc. It’s stylized but beautifully drawn; it fits the story perfectly.

I think what goes wrong in most of the Catwoman books I’ve seen is precisely the lack of lightness. It’s fine if things go wrong– that’s what makes stories. But I want her to be smart, witty, resourceful, a little cocky, and graceful and admirable as a thief– like Bandette. There’s no need to give her the same traumas as Batman.

I have to say that the second book is maybe only 75% as awesome. It introduces a promising villain, Il Tredici. The plot from Volume 1 is wrapped up, but perhaps too neatly: Absinthe doesn't live down to his reputation. Of course, neither did Rastopopoulos. But it's early yet; others may rise to Bandette's challenge.

The one DC book that captures some of this lightness is Amanda Conner’s Harley Quinn. A recent episode had Power Girl hit by a space alien and lose her memory. She wakes up in Harley’s back yard, and Harley convinces her that she is actually her loyal sidekick. Wacky is hard to pull off, but Conner gets just the right balance, I think.

These are light comics— basically each page is a standalone gag— about a girl (so far as I recall she never gets an actual name) who fights crime somewhere in Canada. Mostly ninjas, but your occasional bank robber, tentacled monstrosity, monocled bear, and so on. Some days there's no crime to fight, because, well, Canada.

The fun bit is that Superhero Girl is also a young twentysomething with twentysomething problems. She has to learn to get along with her roommate, she has to find a job to pay for the apartment (because superheroing doesn't pay), she has to find some hobbies for when there's no crime (see: Canada), and above all there's her older brother Kevin… the successful superhero in the family.

Plus, I dunno, most gag strips suck, but her gags are actually funny.

(Hicks admits that she couldn't think of a better name than Superhero Girl. At least it's better than Kevin's nom de pouvoir, which is Kevin.)