This is not exactly the city of cafés. I'm sitting in one now, and the waiter expressed surprise that I only wanted a guaraná (a type of Brazilian pop, from a fruit we don't have). Then he brought me a Pepsi.

[ 2002 note: You can now sometimes find guaraná in the States. It's sometimes described as "like cherry", but it's almost impossible to convey unfamiliar flavors... it is cherry-like, that's about as useful as describing limes as "lemon-like". Anyway, look for it; it's good, unlike the nothing-but-sweet stuff I had later in Peru. ] 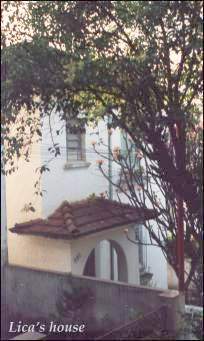 Anyway: Lica, looking the same as ever, picked me up at the airport. We got into his car, a black Ford Corcel, and soon got into a traffic jam... Bill Cochran likes a traffic jam if it's English, but this one palled a bit after half an hour.

Saw a few slums-- they cluster on the outskirts of town. Some are brick and plaster, looking fairly substantial; others, presumably the low-rent favelas, are made of wood, and seem to be the real shantytowns. They only occupy a minority of the real estate along the highway.

[ 2002 note: I didn't have a local guide to the favelas, so I didn't learn much about them... to my regret, since my novel included scenes set in them. I did visit shantytowns in Peru some years later. The material conditions are primitive, of course, but ironically my impression is that it'd be better to live in a favela than in an American ghetto. The reason is that in Latin America the land you live on is (not officially, but practically) yours, and so people are continually improving them-- turning shacks into houses, turning houses into multi-storey apartments. In the ghetto, you live as a renter in someone else's building, so there's no incentive to improve it or even keep it up... quite the reverse. For more on Rio's favelas, I recommend Alma Guillermoprieto's Samba. ]

Cars: mostly Ford, Chevrolet, Volkswagen, all made in Brazil. Many have Portuguese names-- e.g. o V.W. Brasília. Lica's car runs on pure alcool, but has a little gasoline reserve to help start in cold weather. You see a lot of Beetles-- newer ones-- but even Brazil stopped making them about 3 years ago. Judging by the number seen, and thus sold, I don't understand it.

Finally we made it to Lica's apartment. He lives with 3 other people, in a nice little building facing a Spanish Steps-style declivity. They had a little garden out front.

The city, I have to say, reminds me of what I think California looks like. São Paulo is not beautiful, as even Lica says. Most of what I've seen is relatively tidy, if not scrubbed; but mostly modern, concrete (with an air of post-WWII Europe), with few old buildings. And it's huge. I just walked over 2 miles up Avenida Paulista, and it's city as far as one can see... but we were at Lica's place, weren't we?

We stayed only a few minutes, for we were going to Piracicaba to meet Lica's parents. First we went out to eat-- at Café Viena, near where Lica works. My first Brazilian meal: I had a filet a gaucho-- a small steak, a salad (little pieces of garden vegetables in a vinaigrette), fries, Greek rice (with carrots, beans, and other vegetables sprinkled in -- arroz a grego), and a farofa a ovo, which is like nothing else I've had-- it's egg mixed with manioc flour and I don't know what else. It's crumby and very, very dry, but not bad. To top it off I had a suco de laranja e mamãe-- orange-papaya juice. A very Brazilian meal, Lica asured me. (Lica had chicken. He doesn't eat quadrupeds.) I enjoyed it immensely. It cost Cz$ 4000, which is $4 ast the 'parallel' rate, $6.70 official.

We paused chez Lica to pack, then headed out to Piracicaba in the deepening gloom, stopping to fill up on alcohol, for the car, that is. (I gave Lica a bottle of Dad's wine back in São Paulo.) Passed more slums, then got into open country-- hilly and quite pretty. We talked about Brazil and the US and were generally leftist; probably centrist by local standards. Driving at 140 km/h, we got to Piracicaba in a little over an hour.

His parents live in a very nice house on a quiet street (nonetheless everything is carefully locked up, and one parks the car inside a locked gate). It's probably on the level of my parent's house. Lica grew up here. His father is a professor of geology at the University of São Paulo at Piracicaba; he studied in Texas.

Os pais weren't home, but his sister Bea was. She's young, with two kids, and she's a widow: her husband, an engineer, died of a heart attack about a year ago, at age 33-- quite a tragedy. She mostly lives with her parents. We spoke a little bit in Portuguese. Ler um jornal, e falar direitamente com uma pessoa, são duas diferentes coisas! I could understand slow, easy speech, with some repetitions.

Late in the evening his parents came home. Sr. e Sra. T-- M-- will be forever my model of an urbane, kind, bourgeois Brazilian couple of the last generation-- he dignified-looking and taciturn, she warm and maternal. There was a little talk with me, part of which I got, part of which needed translation, and they served Pauducco, an Italian-style fruitcake. The conversation became quick and Portuguese, and I got very little of it... but I blessed every minute I'd spent learning. Before leaving it may seem a tax on one's time, even an affectation; here, it's a crying necessity, and the more you know the better. It's frustrating feeling mute because you don't know the language.

But by this time I was so tired my brain almost refused to make the effort. I must have sounded odd-- "Você e de Chicago?" "Sim, estou cansado." ("Are you from Chicago?" "Yes, I'm tired.") Professor Tournesol à brasileira. I excused myself at midnight, intending (that's pretendante, a faux ami) to write, but absolutely couldn't. I slept instead, not too well, as I had a little stomach ache. Tired... must think...

Lica woke me about 11.45 a.m. I wouldn't have minded another 8 hours, but I felt fine after a shower. Then, breakfast: cakes, Pauducco, milk, cheese, yogurt, toast, coffee; Tony the Tiger sugar-froasted flakes (sucrilhos) were also available. Well, health food it ain't, but this was only the beginning.

We drove from Piracicaba to São Pedro, about 25 km away. Piracicaba is a city of 300,000; São Pedro has about 2000. (São Paulo has 20 million.) It's full of country places for the well-off, and a nearby town, Águas de São Pedro, is a resort. Lica's grandmother lives here. She's 88, and lives with her maid Josefina, who looks even older, and has been with the family 30 years or more.

We only said hello, and then we were off to scale the nearby ridge (by car) -- not really a ridge, since it goes up but not back down. Spectacular. There's a statue of Christ we stopped at, for the view, probably an imitation of Corcovado, tho' I doubt it will be as much of a draw. (São Pedro definitely caters to tourists, but mostly Brazilian ones.)

We drove back to São Pedro and visited Lica's aunt and uncle, who also live there. I think it's time for a family tree.

(The uncle's father was called Nondas, and he Nondinhas, thence Dinha.)

We stayed quite awhile. The first part of the conversation, which was about me, I understood, tho' it was full-speed. f course, it's easier to follow than to answer; it only requires getting the gist. 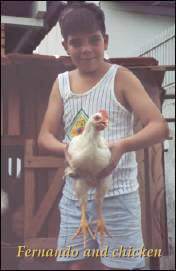 Fernando is about 8 or 10. I think I was a curiosity to him-- a Half-Speaking Human. He showed me his room, his chickens and quail (if that's what it was), he gave me some candy and a whole candy bar, as well as a feather from a galhina d'Angola (black with white spots), and a picture of a tortoise from another candy bar. And he talked, of course; I could follow much of it, but he had to ask tio Lica's help sometimes. (This wasn't always easy; Lica was doing most of the talking among the adults.)

In the course of the meeting, we were served homemade coconut popsicles, a marshmallow-like sweet, guaraná, and bite-sized chicken pies, plus cafèzinho. I don't suppose any of it was good for me but the chicken.

Lica's uncle is, I think, a lawyer. He's portly and genial. Their house is very nice, furnished in dark woods, and sported a Christmas tree and Christmas stockings.

Next we visited a young couple, Tereza e Oswaldo P--, who have recently built a house in São Pedro. Oswaldo is a prosecutor, and Tereza works at the Banco do Brasil, where Lica works. She's a distant relative. She's also terribly cute. Pity. The conversation here was quite hard to follow, being rapid and changing subject often. More cafèzinho.

Their house is also very pretty. São Pedro is pretty well off. Many houses here, including Lica's parents' and his grandmother's, have paved backyards. Grandma's house has a brick patio, and an outside walkway leading to more rooms in another building, and a garden. Apparently it's uneconomical and unusual to put in grass-- especially in the country, where there's plenty of green. They simply find a paved yard nice and trim.

We went back to grandmother's, and talked a bit. I could follow pretty well; avó is going deaf, and Lica had to talk loudly and distinctly. Josefina served us yet more cafèzinho. If you don't serve cafèzinho to your guests here, you're blackballed. I saw how much sugar she put in: about a tablespoon, in a cup the size of a shot glass. Well, they grow sugar and coffee here-- o que deseja?

Finally we drove back to Piracicaba. By the time we were home it was 9, and dark.