More than a decade ago, I took a short trip to Brazil (in part because I was writing a novel set there) and I kept a journal. On paper, if you can believe such a thing. Since most Americans never get to Brazil, much less spend most of the time staying with Brazilians, I thought it might pass as "travel writing", rather than "what I did on my vacation".

I've left it pretty much as written, which is occasionally bad, with some very quirky punctuation... I loved dashes. When stealing factoids for your own novels, do remember that some of them are out of date (cruzados are about three currencies back).

I may try once more to improve the pictures. I prepared them on the Mac, and of course they turned out too dark on the PC. I brightened them up, so now they're too bright for Macs and not contrasty enough for PCs.
--Mark Rosenfelder

The wise thing to do right now would be sleep: one more hour of precious sleep before we land in Rio. However, what this would actually be is an hour of warfare between my body and the airplane seat, battle which has tilted so far definitively in favor of the seat, and against mine. So might as well write instead.

I've been in a similar anxiety to that before my last trip-- please, God, no car accidents en route to O'Hare! But Friday morning was consumed with commenting my code for the Input Manager. I've been working 60-75 hour weeks lately, to get Work Comp done-- a schedule which is multiply annoying but does have the advantage of a truculent righteousness-- I can come in to work at 1 pm, and no one can say a thing-- I've learned to juggle-- I felt fine about working a short week this week to cram in everything that hadn't got done yet: visa, travelers' cheques, cruzados, packing, Säo Paulo shuttle, etc. I haven't had more than 5 hours sleep all week. And as I left work Resource Editor seemed to blow up. Well, Steve can handle it. I told 'em I'd give them the number of the Brazilian consulate. 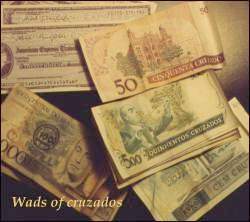 Tuesday I bankrupted Deak in cruzados. They only had $70 or so in cruzados, which I took-- a huge stack of bills. Or perhaps it was a small fortune at the beginning of the year; I hear inflation is running near 1000% in Brazil.

This last bit of information comes from Scott, an old acquaintance of Harry's, and a buddy of ours in 7th grade, whom Harry rediscovered and had over for dinner, with Andrés and me. Scott is a total wheeler-deaeler types; he's buying airplane parts in Brazil and selling them here, and has no personal morality at all. He told me how and where to get laid in Säo Paulo-- indeed, his first question, to me and to Andrés, was 'Are you married?' He's the type who takes you into his confidence and talks a lot and knows the best places to do everything-- the Brazilians he meets would probably like him (he genuinely likes Brazil), and after he leaves say 'Wow. What an American.' The most useful item here was a glowing recommendation for Ouro Prêto, which is evidently wicked quaint.

Anyway, I'm in Transportationland, with a vengeance. Limo to O'Hare, fly to Washington, fly to Miami, fly to Rio; next, fly to São Paulo. I have a reservation on a 3.30 flight and am waitlisted for the 12.30. Please, Lord, three hours less of Transport!

I started seeing Brazilians in Washington, and from Miami on we've been in a sort of hell for the English as Official Language folks. The flights in Miami were all announced bilingually, and our Pan Am flight has featured announcements in English, Portuguese, Spanish, French, and German. The noise ratio on the intercom is too high for me. I can't say I can't understand a word of it-- I can. I just can't understand a sentence of it.

I talked a bit to my seatmate, a Brazilian from Goias. He's originally from Iran-- he's a Bahá'í, and his family left to escape prosecution, leaving initially for Canada. His parents moved to Brazil because Canada was too cold, and while visiting them he met a girl, and the upshot is that he's married and works as a systems analyst. His slightly constrained English, and the fact that most of this could have been conveyed in Portuguese, led me to essay speaking o português.

I can't say it was a success. I'm still very halting, and prone to understand a phrase just a little too late, after I've already said 'What?' The word hapido threw me for a loop, till he translated - rapid - it's rapido. So they do say R's as H's. I'd swear it wasn't a French r! Or maybe I wouldn't. Anyway, this guy's reading a book called How to make love to a woman-- he has the book cover folded back so all and sundry don't see-- it may not be a very Bahá'i book.

Well, this is the final approach to Brazil, so pardon me while I extinguish all smoking materials, return my seat to an upright position, and put all carry-on articles under the seat.

Deal with this: I'm in Brazil. It's been a day and a half, and I could fill the rest of this Nothing Book with impressions. But I suspect the best thing is to record events now and get back to feelings later.

Between each flight I felt anxiety about being late, but in fact we landed in Rio roughly on time-- maybe 11.20 a.m. We filed out of the plane slowly, into Galeão airport, and directly into the hands of the police-- the entry check. The line was much quicker than in Heathrow. Baggage inspection is random, and I got a green light-- I was skipped.

The airport is modern, perhaps '60s in style, and all the signs are in green and yellow-- patriotic colors, of course, in Brazil. I was waitlisted for the 12.30 flight to São Paulo, confirmed for the 3.15, and had no idea where to go, or whether I had to cross town... but I followed the signs for SAÍDAS DOMESTICAS, and found the VASP ticket counter, with no problem. There was a short line, which moved way slowly, so I had plenty of time ot stare at the very pretty girl at the counter and think what to say. Could I manage it all in Portuguese? In the end I said only "A senhora fala inglês?", and she said "Muito bem," and we were off. She applied some bureaucracy to my ticket and sent me to the baggage check-in, which didn't speak English. They took my suitcase-- for the first time so far-- imagine my Frommerian pleasure when I could skip baggage pickup in Rio. I had to go back to the caixa, near the ticket counter, to pay the airport tax (thank you, Deak's, for the cruzados), then back to the checkin to receive my boarding pass-- finally I could head for the gate, about 20 minutes before flight time. We boarded about 10 minutes later.

[ 2002 note: Frommer is the author of what was then Europe on $30 a day, from which I learned to take just one carry-on suitcase, and never to make hotel reservations. This makes it easy to improvise; it also explains why, in this journal, I'm always looking for laundromats. ]

Finally I felt we were in Brazil, because this was definitely an inter-urban trip-- everyone else was Brazilian, it wasn't simply the last leg of a transcontinental trip. The announcements were all in Portuguese, without a speck of English. A stewardess came by with a newspaper, a Jornal do Brasil-- to my relief, as I'd finished The Bonfire of the Vanities (and Time) and hadn't brought my notebook. I found I could read it easily-- this and that would escape me, but I could follow along just fine-- the repressed coup d'état in Argentina, the metro crash in Rio, the human interest story about the girl who cried because her soccer team lost, and in compensation a player gave her his shirt.

When we took off I caught a glimpse of Rio, out the window... for some reason it looked just like the pictures-- there was o Pão de Açúcar, Copacabana, Ipanema-- tantalizing. A stewardess came by with Cokes, and later a cafèzinho: a thimbleful of strong, sugary coffee-- I liked it. I proved masterful at the Portuguese necessary for these transactions-- mainly sim.

Finally we landed. It was 1.30-- I was nearly out of Transportationland. I waited for my luggage, then wandered out into the airport in search of a telephone to call Lica. (I'd left his phone number in the suitcase.) Easily found; but the phones required tokens-- fichas. I looked around for something that promised fichas, but didn't see anything. I went over to the Tourist Information desk and had my first wholly effective exchange in Portuguese:

Triumphant, I went to the café and procured six tokens. (Curiosity: procurar in Portuguese = look for.) A point against me was that the girl showed me a bill of the right size, so I hadn't yet taken off my FOREIGNER sign.

After some struggle with the phone, the telephone's aim of course being to see how long it could keep me from figuring out how to make a simple call, I managed to call Lica. He was glad to hear from me, and asked where I was.

Well, this was a poser. We exchanged some clues, and eventually Lica settled on one. I still don't know which one -- after hanging up I wandered around in search of some clue to the name of the airport, and found none. [Later learned that it's Guarulhos, commonly known as Cambica.]

It's a very modern airport, by the way. Of course, I thought, it's an airport, how typical will it be? It has lots of shops, attractive signs, bustling people of all colors, and people offering to change money-- no Larouchies that I could see. I waited at a "Punto de Encontro", leafing lazily through a Jornal do Brasil, feeling a bit weak in the stomach: too much vibration in almost 24 hours of flight time.

Guide for the Perplexed: hit the "next" button there.