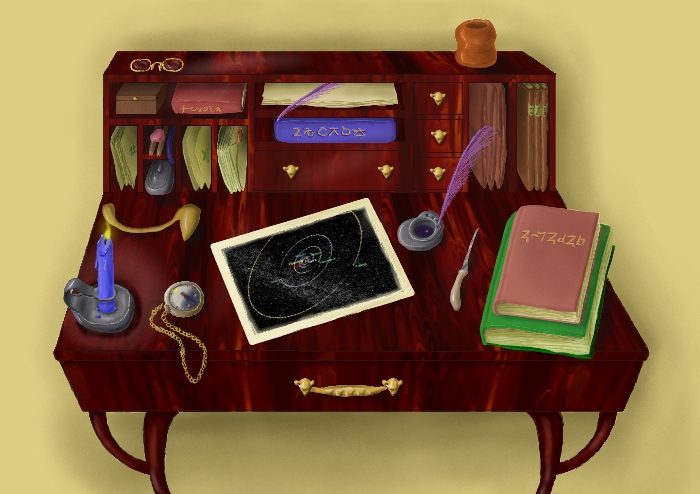 A writing desk, littered with bits of Verdurian culture.

The large red book on the right reads ALUATAS-- a grammar of the Verdurian language. We can expect that it sets out in great detail everything about the language the speaker already knows, and in even greater detail, how to write it according to the best literary standards. The larger book underneath it is a logora (dictionary).

The blue book on the shelf is the AĎIVRO, the holy book of Caďinorian paganism. It is only in the last centuries, in competition with and imitation of its rival Eleďát, that ordinary believers have been encouraged to possess and study the book; previously it was the domain of priests only.

The owner of the desk prefers a yežil or quill pen. The feather comes from a mémia (an Almean bird similar to the turkey); the bright purple color is a dye. The ancients wrote, with much greater annoyance, using reed pens. A newfangled alternative is a pen crafted out of metal. The ink (fulüra) comes in powder form (the ink tin can be seen in a pigeonhole at the left), and is mixed with a little water to form liquid ink. Its principal ingredient is soot, with a little resin to add viscosity.

Some of the modern conveniences of Verdurian life are shown: eyeglasses and a fine watch.

In the center of the desk is a representation of the solar system. Almeans were far ahead of terrestrials in understanding that their planet moves around their sun; the idea was proposed by Cuzeian scholars, and widely accepted in ancient times. It was only in the last centuries, however, that the planetary orbits were understood to be ellipses.

If you're wondering, the picture was drawn using Painter Classic, using a graphics tablet. I love those things.