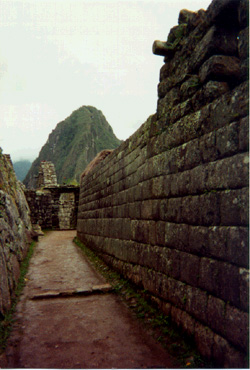 Fun facts to know and tell about Quechua

I thought I'd tell you a little about the Native American language I'm learning, Quechua.

You may have heard of Quechua as the language of the Incas. You may not know, until you finish this sentence, that it's the most widely spoken Amerindian language, with over 8 million speakers. In Peru, a quarter of the population speaks Quechua, and about a third of the Quechua speakers speak no Spanish.

Quechua has also influenced Spanish syntax. In Iquitos, for instance, it's common for even monolingual speakers to put the verb at the end, as in Quechua, or to say things like de mi padre su casa 'of my father his house, my father's house', reflecting Quechua tayta-y-pi wasi-n.

Quechua can be heard on Andean music, which is getting easier to find in the States, either in its natural form (such groups as Rumillaqta, Markahuasi, Ayllu Sulca, Ch'uwa Yacu), or in more Westernized forms (e.g. Inti Illimani). The singer Yma Sumac has a Quechua name-- ima sumaq means 'how beautiful!'

Peru is divided into three main racial strata. The criollos or whites (15% of the population) are on the top; the mestizos or mixed-blood people are in the middle (37%); the Indians (45%) are on the bottom. Peruvians can be very racist, and indio is used as an insult. (The Quechua refer to themselves as Runa, 'the people'.) Like oppressed classes worldwide, the Indians are described as lazy, criminal, and stupid.

However, there is much to admire about Quechua culture. It's a culture that places great emphasis on community and mutual help (ayni). The social system is based on reciprocity: you help your neighbors, they do something for you in return. Some Quechua communities were well enough organized that Peru's Sendero Luminoso guerrillas could make little headway among them.

The Incas also did not lay down before the Spanish quite as docilely as we are taught in school. Armed resistance continued for fifty years after the Spanish conquest, and flared up again in 1770 in the rebellion of Tupaq Amaru II, still remembered fondly by the Quechua (and by at least one American rapper).

The novels of José María Arguedas, himself bilingual in Spanish and Quechua, are powerful evocations of Quechua culture, and of the scorn the Quechua face from the rest of Peru.

A single word which tells much about the relationship of Quechua and Spanish speakers is pishtaku: in Andean folklore, a supernatural being which kills Indians and sells their fat in the cities to make sacrifices, or to be made into soap. In modern forms, this is said to be done to pay off the external debt! During the war, the pishtakus were associated with Sendero's guerrillas, or sometimes with the army-- twin sets of outsiders, coming into Quechua territory to make demands and to enact brutal crimes; only a word depicting a sort of demon predator could convey the appropriate tone of horror.

Quechua is divided into a number of dialects. The major division is into 'Central' and 'Peripheral' Quechua. These are not normally mutually intelligible. Mutual intelligibility is tricky, however (see the linguistics FAQ on 'languages vs. dialects'). Speakers of the modern Quechua dialects don't interrelate much (if they do much travelling, they know Spanish), and so don't have the habit of deciphering other dialects. Given the opportunity (for instance, at a congress of Quechua activists), the differences between the dialects can be bridged.

The Central Quechua dialects, spoken in the central Andean spine of Peru, are the most diverse among themselves; this leads some linguists to suppose that this area, and not the Inca capital Cuzco, is the ancient homeland of the Quechua peoples.

The Incas extended Quechua to (modern-day) Ecuador, Bolivia, and Chile; the language continued to expand after the Spanish conquest, due to its importance as a trade and missionary language. As a result, it's spoken today in some areas (e.g. parts of Colombia, Brazil, and Argentina) which were never part of the Inca empire.

Distinctive forms of Quechua are found in the north of Peru (Cajamarca, San Martín, Loreto) and in Ecuador, where it is known as Quichua.

The best-known form of Quechua is that spoken in Cuzco (Qosqo), in southern Peru and east to Bolivia. A closely related dialect, that of Ayacucho, is spoken just to the west of Cuzqueño.

Cuzqueños, and even students of Quechua who should know better, will tell you that Cuzco Quechua is 'purer' than other varieties. This is quite untrue; Cuzco dialect has innovated in many ways, both in phonology and in the lexicon.

Quechua has been heavily influenced by Spanish, of course. Some 30% of the lexicon, even in monolingual speakers, comes from Spanish. Different layers of Spanish can be found in the language. Early borrowings, such as riru < dedo 'finger', or arwi < adobe, are manhandled to fit native phonology. More recent words such as chufir < chofer 'driver', sirbisa 'beer' < cerveza, kubardu 'coward' are less modified, as Spanish sounds have become more familiar.

It has long been believed that Quechua and Aymara are related, but doubt has recently been cast on this hypothesis. The chief problem is that the similarity (lexical and phonological) is most pronounced between Cuzco Quechua and its neighbor Aymara; other dialects of Quechua, and Aymara's relative Jaqaru, are less obviously related. It may be that Quechua has simply borrowed massively from its neighbor (or vice versa).

Quechua has a three-vowel system: a, i, u. The vowels, like computer geeks, spread out to fit the space available-- an i, for instance, may be heard as [i], [I], or [e]. Bilingual Quechua speakers may approximate the five-vowel Spanish system (but they often get it wrong, producing a distinctive Quechua accent called motosidad).

Quechua words are often cited with e or o in them. This is because before or after a /q/, i sounds like [e] and u sounds like [o]. Some people prefer to write (e.g.) qumir and not qomer 'green'.

Disregarding Spanish loans, the consonants of Ayacucho Quechua are:

About the only difficult sound for English speakers is q, rather like the German ch in Bach, but pronounced farther back in the throat. The pronunciation of q varies widely by dialect; in Cuzco it's a post-velar stop (like Arabic /q/) except at the end of a syllable, where it's fricativized; in Ecuador and San Martín it becomes [k]; in Junín it's lost at the beginning of a word, and becomes a glottal stop [?] elsewhere.

ll and ñ have their (original) Spanish values. Thus llama sounds something like "lyama", not "lama" or "yama".

Cuzco dialect has two entire additional sets of stops: aspirated ph th chh kh qh and glottalized p' t' ch' k' q'. Other dialects of Quechua, including Ayacuchano, do not have these sounds, and they constitute a puzzle in Quechua linguistics. The same sounds occur in Aymara, and our best guess is that they are borrowed from Aymara.

The northern dialects distinguish between two types of s and two types of ch (the phonetic details vary by dialect). Early colonial sources show such a distinction made in Cuzco dialect as well, indicating that the distinction dates back to the earliest forms of Quechua, and has been lost in the southern dialects.

Quechua, in fact, is very nice for studying sound change, because we have written sources (from bilingual speakers) dating back five hundred years, yet its monolingual speakers have generally been illiterate. We can thus observe the process of sound changes over the centuries, without the conservativizing filters imposed by a written language.

Highlights of the grammar

(Citations are in Ayacucho Quechua.)

Quechua words can almost always be divided neatly into morphemes (elements with a single meaning). Quechua is thus an agglutinating language. By contrast the Indo-European languages are inflecting languages.

Compare Quechua wasikunata 'houses (acc.)' with Russian domá. Both consist of a root (wasi-, dom-) plus suffixes; but while the Quechua suffixes can be separated into units adding the ideas of plurality (-kuna) and accusativity (-ta), Russian -á cannot be so broken down: it's a unit, plural + accusative.

Likewise compare Spanish comí 'I ate' with its indivisible inflection -í conveying the first person singular subject and the tense, as against Quechua miku-rqa-ni, where -rqa expresses the past tense and -ni the subject.

Nouns are pretty easy. There's no gender (as in Spanish or French) and no articles (i.e. 'the' and 'a'). The plural is -kuna, but it's optional if the meaning is clear.

Adjectives come before nouns: hatun wasi, 'a big house'. So does a noun used as a modifier: alqo wasi 'dog house'.

In addition to the direct object marker -ta-, there's also a topic suffix, -qa- (like Japanese wa). It indicates that the word in question is old information; it's what the sentences is about. Compare:

There are also suffixes to indicate possession: e.g. wasiy 'my house', wasiyki 'your house', wasin 'his house'.

The verb generally comes last in a sentence. However, as objects are explicitly marked, word order is fairly free.

Quechua verbs are entirely regular. Once you know one verb, you know them all. Even kay 'to be' is regular.

That doesn't mean that they're exactly easy, however. Verbs are inflected by person--

Other tenses are expressed by other suffixes: rimarani 'I spoke'; rimachkani 'I am speaking', etc. None of this is really hard, but it takes getting used to, for an English speaker.

These can get pretty baroque: there's a narrative past suffix, a causative, a reflexive, a benefactive, suffixes indicating movement, repetition, and so on.

Even more unusually (at least to English ears... French speakers might find it natural) is that object pronouns are incorporated into the verb: e.g. rikuwanki 'you see me', where -wa- means 'me'.

Actually the distinction between nouns and verbs is not rigid in Quechua. The word awa, for instance, means 'weave' if you attach verbal suffixes, or 'a weaving' if you attach noun suffixes.

One of the most interesting features of Quechua is what we might call 'attitude particles'. For instance, -m(i) expresses personal knowledge:

It would be nice to be able to see this distinction used in Usenet postings.

There are also particles expressing that an action was--

As you can imagine, you can put quite a fine spin on a statement. Being able to use all these suffixes correctly is the mark of one who knows the language well.

It's a pain to find sources on Quechua in the States, and not much easier in Lima. One book that's not too hard to find is Ronald Wright's Quechua Phrasebook, from Lonely Planet. It's well done and contains such useful phrases as Q'echa onqoywan kashani 'I have the shits'.

Anatole Lyovin's An Introduction to the Languages of the World has a sketch of Quechua grammar in a little more detail than this one (and is worth reading for its other grammatical sketches as well: Tibetan, Tok Pisin, Inuit, Dyirbal, etc.).

I've also used Rodolfo Cerrón-Palomino's Lingüística Quechua, Bruce Mannheim's The Language of the Inka since the European Invasion, John Lipski's Latin American Spanish,and the series of reference grammars and dictionaries published in 1976 by the Instituto de Estudios Peruanos. One of them (San Martín) has, I swear to God, the sample sentence Bakayni kuruyan ukutinpi 'My cow has worms in its anus.' And you think you've got problems.

I'm also indebted to my wife Lida, a Peruvian, for giving me an inside perspective on Peruvian society, and for being understanding when I didn't like the chicken stomachs.

If you're inspired to learn Quechua, your best options, in descending order, seem to be--

Happy learning! Watch out for those worms!

Since writing this article, I've become aware of a number of Quechua pages on the Web, including these: