I love this comic. I'm not sure I like it, but I love it.

What does that mean? The easiest way to explain is to cite a bunch of reviews on Goodreads, which amount to: fantastic art, story fails. And they're about 50% right! 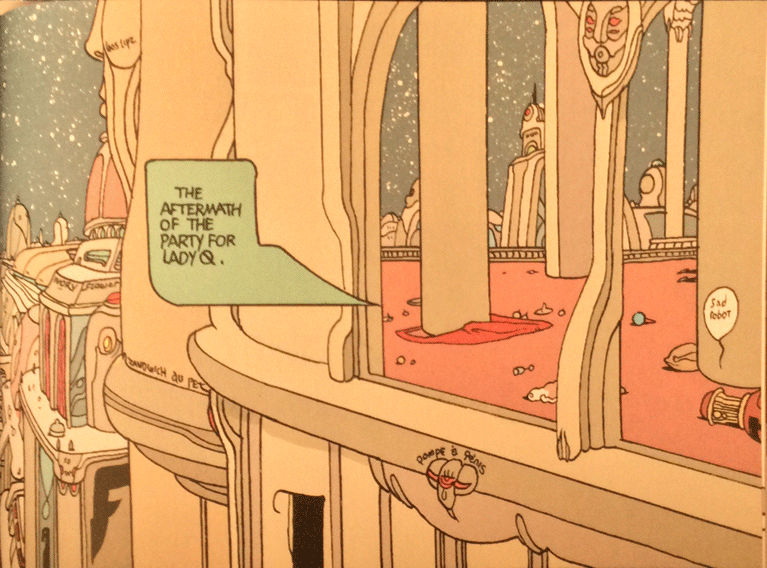 The main draw is, well, the drawing. Graham channels late Moebius, and Euro comics in general, so closely that I checked a couple times for a "Translated from the French by..." notice. Nope, he's American. But he has that late Moebius style: strange panoramas, big flat areas as well as finely worked ones, elegant colors, an eye for far future invention, and above all the sheer preposterousness.

So, what is it? The first chapter explains nothing; it just follows the everyday life of a guy named Eugene who lives and works in Elephant, a city that moves slowly across the landscape of a huge barren planet. Graham lovingly draws his tiny apartment, his few interactions with co-workers, his meals, the music and shows that are his only escape. Something goes wrong with another of the moving cities, and Elephant goes to help. This gives Eugene some excitement, but mostly exhausting work. Graham notes that this chapter was written before the pandemic, but anticipates the depression and isolation of lockdown.

The next chapter changes gears entirely. The story now follows Brik Blok, a “dangerous invididual,” arriving on the planetoid of the immortal aristos, Sky Cradle. Brik is hit by the space defenses and crashes, though he clings to life long enough to fire a sort of harpoon at the person who comes to investigate. This causes his consciousness to take over the man's body. He then tries to continue his mission in this new alien body. To get access to the level where the aristos live, he will need one of their fingers. Fortunately he's met a little monster who can help.

Even later we meet the object of his mission-- El, a young woman who is in training, or competition, to join the aristos. She is part of a class of 53, of which only a fraction is left. Then their teacher announces "Today's lesson is on survival. This room will now try to kill each of you."

But I'll get back to the story again later. I do like the characters, but what keeps me re-reading the book over and over is the art and the playfulness. An outlandish space opera is best served with mind-blowing art, and Graham delivers. He doesn't match the painterly thoroughness of early Moebius, but he has visual imagination and style, and his characters express emotion well.

Then there's the playfulness. As just one example, at one point Brik mentions his discomfort with his new body's feet. They look like shoes, and to this point we've taken them as shoes; but in fact they're bare feet that look like shoes, with toes he can wiggle. It's a one-panel joke, completely unnecessary. But it contributes to the fantastic, slightly unnerving atmosphere, and it's fun. Likewise the "little monster", an alien with a weakness for delicious rocks and for human aristocrats. Or Graham's habit of adding little sound effects or French phrases, playing games with speech bubbles, etc. This sort of thing too is more characteristic of French comics, which can't muster the po-faced seriousness Americans tend to put in their fantasy and sf. 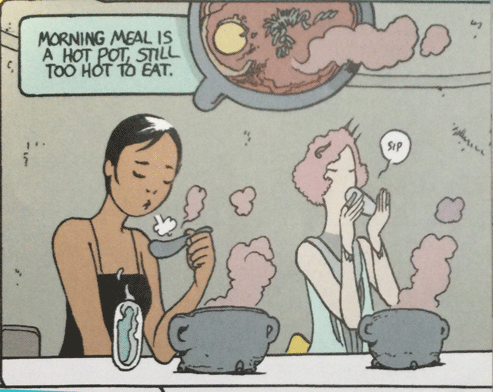 One oddness: artists sometimes stick with a trope they've gotten familiar with-- e.g Boulet and his weird profiles, Carol Lay with her misplaced mouths. Graham's is to draw heads like cylinders, as if he never realized that heads have a different shape in profile and front-on. It's fine with Brik, who's an alien humanoid anyway; it's a little weird when he's drawing a pretty girl like El.

As for the story: the people who don't like the book are 50% wrong, in that the book has a coherent one-- an ending, even. It's just, again, not precisely to American tastes. We like heroes saving the day, or in a tragic mood, failing in spectacular ways. Here (spoilers) Brik's side wins-- but it turns out he is far less central to the action than he thought. He and Eugene and the little monster go off to start a new life.

This isn't to say I liked the plot entirely. There's one subplot that rubbed me the wrong way-- an agent for the aristos named Ott, and his sex-crazed robot secretary. The last chapter features a multiplication of characters that is rather confusing. There were clues earlier-- the aristos are immortal because they can get new bodies after they die; Brik's new body is "vat-grown"-- but it's not a satisfying ending. The underlying conflict of the book is resolved but some bits remain inscrutable (such as what the fuck the "Alljudge" is doing). But that feeling is exactly what the protagonists (especially Brik) are supposed to be feeling. The consolation of fiction is often precisely the feeling of understanding the plot, but most of the time in real life we never know.

Anyway, probably a good test for whether you'll like this is whether you liked The Fifth Element. If it was too off the wall for you, probably not. If the weirdness was precisely what you liked about the movie, then you probably will.

I picked up King City to get more Graham. I was looking for more of the same, but this is more like less polished early work. It’s set in a much nearer, cyberpunky future, and follows a guy named Joe who’s a spy and a cat master. That is, he has a cat named Earthling who can do all sorts of magic— pretty much whatever the situation calls for.

Now it’s a fun idea, and Graham certainly doesn’t get too serious about it, but I think the silliness of the concept, and the refusal to set boundaries to the cat’s powers, lower the emotional stakes. I mean, there is an elder god or something returning, but neither Joe nor Graham really take that seriously.

At this stage Graham’s art was not as overwhelming, and black-and-white lessens it. Also, I think he didn’t quite know how to handle his female characters. They are girlfriends, not people; he doesn’t think to tell their story. He was able to fix this problem in Rain.