On a whim, I picked up The Celebrated Cases of Dick Tracy, a big helping (290 pages) of the big yellow-trenchcoated lug. It's surprisingly good! 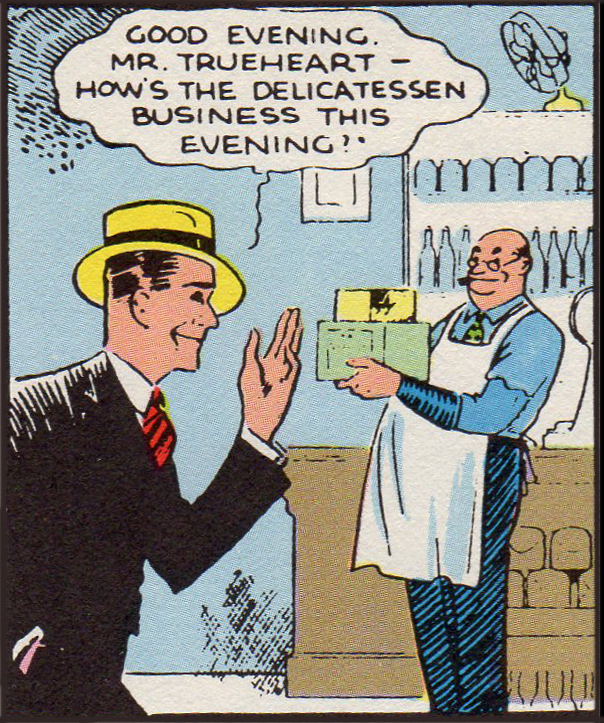 The comic strip started in 1931 and is still going on, nearly a century later. This volume covers only his first 20 years; these old strips are usually at their best near their beginnings anyway. (As a kid, I'd occasionally see Dick Tracy— it was in the Tribune, which we didn't subscribe to— and found it uninvolving. But not only are the earlier strips better, but reading them in a book is far superior.)

The obvious comparison is with the first volume of Batman. I think it's illuminating to look at exactly why it's way better.

This isn't to say that it's deep or anything. Tracy's villains at least keep close to the roots of crime: they're either gangsters, or people driven to crime by greed or desperation. But Gould never has the insights that Hammett and Chandler have— that crime is part of a system created by the elite, instigated or tolerated by it; and that cops can be petty or crooked. Still, it's neither as unworldly or as grimdark as superhero comics.

Reading the book made me realize something about early 20th century American humor: it was mostly based on punching down. You do have punching-up humor: the Marx Brothers, Bugs Bunny, etc. But nothing was so hilarious to Americans of that period as an ethnic minority, or rural whites. Women were more interesting, but weren't supposed to take part i the violence, though they could be villains. A lot of the comic relief in the strip was provided by B.O. Plenty, a rustic, explosively bearded old man who first appears as a minor villain, and eventually marries a rustic old woman, Gravel Gertie; together they give the strip a little Dogpatch of its own. A very little of this goes a long way; the joke is simply that these people are uncouth and talk funny.

The strip benefitted— in its early decades— from having enough space. Comic strips then ran across the entire page, so adventure strips thrived. Now they're printed at half that size, and only gag strips can really work in that environment. Gould's art is not the top of the form, but serviceable. I do have to point out his mastery of noses. Cartoonists often have one take on a body part, and repeat it for all their characters, but Gould seems to design an entirely new nose for every character. (He’s almost as good with eyes, but not so great with ears.)

In the '60s Gould got fascinated with space travel: Tracy went to the moon, discovered people living there— basically humans with antennas— and acquired fancy moon tech for the police department. None of that makes this volume, which is probably for the best. When you have to add flying cars to your comic strip, you've probably run out of things to say about crime.