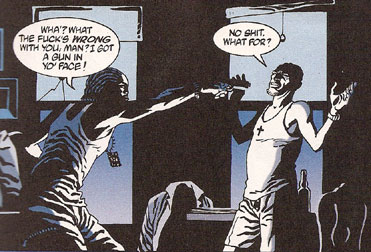 I've heard about this for years, but never picked it up. But what do you know, our library has a small but good graphic novels collection, and most of the series was in.

It starts out high-concept: a military-looking old dude who calls himself Agent Graves approaches various down-and-out people with a briefcase containing incontrovertible proof that their troubles are due to a certain individual. Plus a handgun, 100 bullets, and a guarantee of untouchability: the law can't touch them for whatever they choose to do with those bullets.

The series covers quite a few recipients of Graves' largesse, starting with a Latina gangbanger named Dizzy who's just getting out of jail, and whose husband and child were murdered while she was in stir. The stories are deeply gritty, delving into the underside of American life, with a keen sense of dialect and place. (Dizzy's story is set in Chicago, and it really does look like Chicago. Though his Latinos possibly sound more black than Hispanic.)

Noir suits comics very well, and the setup allows Azzarello to explore some twisty passages of the human soul... what happens when people feel untouchable? Will revenge make them happy? Naturally not all the stories end well, and the promise of impunity extends only to the law.

Despite the regrettable uses they're put to in real life, bullets are narrative gold. Bring out a gun, and situations change. Right there on the page you get power, fear, the closeness of death, and the risk of making a mistake that can't be undone.

Eventually, Azzarello starts focusing on who Graves is. It turns out he's involved in a war between two cabals... I could explain the detais but I won't, because the whole thing kind of pisses me off. It seems to me like a betrayal of the initial idea, and of noir: the grim realism is thrown away in order to create a fantasy of conspiracy theorism. I'd have left Graves as an unexplained bit of magic realism, but modern English-speaking audiences are very uncomfortable with this sort of thing-- they want their questions answered. But I think it's a cheat. The implication of the first few stories, like that of all good noir, is "This is how the world is, with all the violence you gentle readers prefer not to see." But conspiracy theories are precisely how the world isn't. It's like Sam Spade discovering that the strands of plot eventually lead to The Joker.

But, well, after you rethread your head, the series is good if not as brilliant as it first seemed. Many of Graves's contacts turn out to be related to the cabals-- either former or prospective members. And Azzarello is a great storyteller, who's at his best when his characters veer off the path. One of the most memorable stories involves a set of mistaken identities; it's grimly comic to watch the pieces click into place; we know it's going to end badly but not how. And the series as a whole has the same sense of structure: the individual strands seem unconnected at first, but start to interrelate and come together.

I didn't say anything about Risso's art, did I? Well, it's good-- it doesn't call attention to itself like Frank Miller's, but it underlines the atmosphere and he's good at caricature. Lurid colors, though; the pages look best when the color palette is restricted.

Update: The later volumes never quite pay off. Azzarello spends much of the series building up each character as The Ultimate Badass; the problem with that strategy is that when you face them off against each other, the only way to get them killed off is to have them make uncharacteristic mistakes. Plus it's unrelievedly violent... if I wanted that I'd play video games. 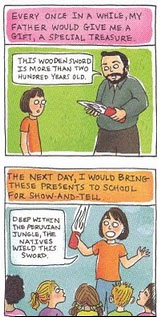 I don't like con men. The personality type turns me off; what comes off as charm to others just feels slippery and narcissistic... maybe they remind me of salesmen, the bane of programmers' lives.

But I love to read about them. I admire a good con game; I love a good David Mamet plot, or characters like Uncle Duke. So this book is great: it's a portrait of Laurie Sandell's astonishing, infuriating father, a liar and fraudster. (If that's a bit vague, it should be; what he's capable of should surprise the reader as it did Laurie.)

As a young girl he was a hero to Laurie, a father who made the rest of life seem mundane; but as she grew up the relationship darkened and pretty much messed her up. Part of what I found fascinating is that the dynamics of a dysfunctional family seem to be the same whether the problems are minor or huge. Whether the problem is that the parent is overprotective and intrusive, or actually criminal, the same things seem to happen: codependent protection of the out-of-line parent and ostracism of the rebellious child.

Sandell is very honest about her own problems... one of her admitted faults, for instance, is using the story of her sociopathic father to bond to others, arguably a pattern she's continuing by writing a book about him. Though I can't begrudge her that; again, in this kind of family where obvious truths can't be spoken, you get an enormous need to have your story validated. And it is a very striking story. To be kind of callous, it's a relief that the problem isn't alcoholism or sexual abuse, which are a little overmined.

In some ways Sandell is exploring the same moral question as 100 Bullets: can you blame all your troubles on one person? Where does their responsibility end and yours begin? Laurie, for instance, has trouble with commitment in relationships; she feels stifled by ordinary life. That's clearly related to the experience of living with her larger-than-life father. He's both to blame for it, and not to blame.

The comic bears comparison with Alison Bechdel's Fun Home, another exploration of a colorful but troubled father and his effect on a cartoonist daughter. Bechdel draws much better and her book is more intensely literary, but Sandell's story works much better as comics. It's highly readable and often quite funny. Plus, Sandell gets in more trouble, which makes for a better story-- being well-adjusted makes for a better life but a less interesting novel.