Bob is somewhat bemused to note that he's been reviewing comics for ten years. To celebrate, the page design has been updated from the cream-o-'96 style it previously sported! Plus you can use the arrows to read the reviews in order. 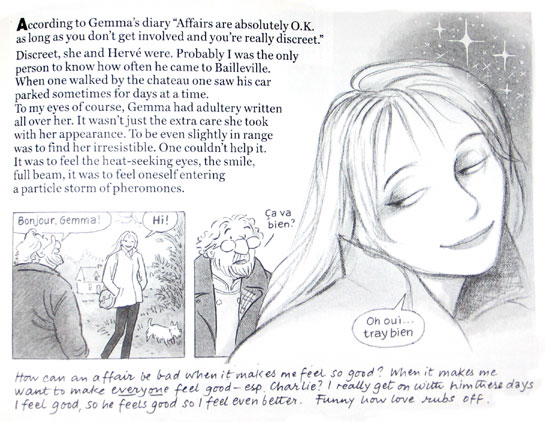 Gemma Bovery... that sounds like Emma Bovary! And this largely is a retelling of Flaubert's novel. Or is it?

Gemma is a young English woman, a London illustrator, and rather pretentious, though what she's pretending to keeps changing. She goes through a goth phase; she's a young sophisticate dating a snarky restaurant reviewer; she marries Charlie, an absent-minded furniture restorer, and turns to being pretentious about being unpretentious; she drags him to Normandy and decorates a cottage in full rustic mode; she gets sick of that and redoes the place in Swedish Gustavian...

Like Emma, she tires of her husband and romances the local squire. Her neighbor, the local baker, Joubert, is all too aware of the resemblances, and indeed does his best to nudge them along.

The story is told after Gemma's death, by Joubert, who has discovered her diaries and is trying to integrate him with the often quite different picture he'd formed at the time. Eventually we find that Joubert isn't as reliable a narrator as he seemed, and the story doesn't end where we were led to think.

The storytelling is amazing. A good deal of the story is told in prose (mixing Joubert's ruminations and Gemma's diaries), but this isn't allowed to overwhelm the drawings. Traditional panels with balloons are used for dialog. Pages seem designed as wholes, and vary pleasantly in structure.

The drawings are well done, something like a New Yorker cartoon turned into a comic strip. (Gemma's vulgar compatriot Wizzy Rankin looks like a female version of Hergé's Séraphin Lampion.) The one oddity is that Gemma is drawn with enormous eyes and tiny pupils.

If you know French, the scraps of French are a lot of fun as well. Joubert's English prose even features authentic faux amis-- e.g. at one point he "composes" a phone number.

Overall, the tone is light and satirical; Simmonds knows how to make characters look ridiculous without despising them.

I love Alison Bechdel's Dykes to Watch Out For, and I've been looking forward to this book for years.

It's largely a biography of her father, extending into a portrait of her family. And he was certainly a character: a high school English teacher who ran a funeral home (called the Fun Home in the family) on the side; a house restorer with an absolute passion for Victorian rococo; an urbane character who was born and lived and died in a small town in Pennsylvania; and last but not least, a closeted bisexual.

The last bit becomes more and more important, as Alison discovers her own lesbianism, and contrasts her earnestly open lifestyle with her father's intense repression.

The first half of the book lives up to the name-- confirming, perhaps, C.S. Lewis's judgment that the most interesting part of any autobiography is the part devoted to childhood.

In the second half the narrative devices don't work so well. Throughout, Bechdel writes narrative captions; early on, this offers some ironic distance on the immediacy of the cartoons, but after awhile it gets tiring-- despite her telling us the most intimate family details, the quiet prose rarely gets lively and rarely varies in tone. The literary references begin to sound like a freshman seminar-- if she brought up Madame Bovary, one feels that it'd just be a set of considered parallels between the sadness of Emma's marriage and her parents', rather than Simmonds's extended romp. Worse yet, she gives us an extensive tour of her childhood diaries, which are no exception to the general truth that people's journals are boring. (All right, Neil Gaiman's isn't. But then there's Livejournal, so the signal to noise ratio is about 1/10,000,000.)

I think the book also focusses a little too closely on Alison and her father. Perhaps her family wasn't cooperative, but I'd like to know what her brothers thought of all this, or other relatives and townsfolk-- or her father's boyfriends.

The art is beautiful-- Bechdel's precise drawings can be a little busy in black and white; they're softened and clarified by bluish-green watercolor.

The back cover suggests that the book is what we'd get if David Sedaris could draw. That's not a bad comparison, especially if you like Sedaris's stories about his eccentric family. Bechdel is not so acerbic, however.